BACK TO MAIN SITE 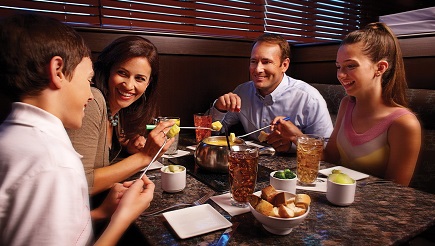 The Melting Pot Commemorates 40 Years of Fondue With Major Accomplishments

The Melting Pot Restaurants, Inc., the world’s premier fondue restaurant franchise, is celebrating its 40th anniversary in 2015 with international expansion, continued brand evolution and new honors with recognition as the top casual dining franchise in the 2015 Nation’s Restaurant News Consumer Picks report. As The Melting Pot commemorates this milestone, the franchise boasts its first location outside of North America, with a newly opened unit in Jakarta, Indonesia.

The Melting Pot first opened in Maitland, Fla. in 1975. Ten years later, the Johnston brothers, Mike, Mark and Bob, purchased all rights to the restaurant and established The Melting Pot Restaurants, Inc. franchise company, setting their sights on growth. After 10 years of initial slow expansion, the franchise more than tripled in size from 1995 to 2002 and added 34 restaurants over the next three years. In 2010, the franchise celebrated its 35th anniversary with the opening of its 100th restaurant and the beginning of international expansion into Canada and Mexico.

“The Melting Pot is an ideal brand for international expansion because many cultures place a high value and importance on dining and spending time with family and friends over meals,” said Bob Johnston, CEO of The Melting Pot’s management company Front Burner Brands. “This really pairs well with The Melting Pot dining experience — a celebration of life’s moments centered around food.”

With significant international success over the past five years, the franchise expects to see 24 percent growth by the year 2020, with a focus on both international and domestic expansion. In honor of its 40th anniversary, The Melting Pot is offering new franchisees who sign a franchise agreement in 2015 to develop one or more restaurants a 40 percent discount off the initial franchise fee for their first restaurant — an $18,000 savings.

This year, The Melting Pot was recognized as No. 1 among 40 casual-dining restaurants in the Nation’s Restaurant News (NRN) 2015 Consumer Picks report. The Melting Pot ranked first in four out of 10 overall attribute categories, achieving top scores in cleanliness, service, atmosphere and craveability. Constant brand evolution throughout the decades has kept the fondue experience fresh and current with consumer dining trends.

“The Melting Pot is currently testing a new menu line to be offered in addition to its traditional fondue courses: fully cooked entrées made in-house to accelerate speed of service and increase repeat business,” said Mike Lester, president, The Melting Pot. “But while our fondue concept has adapted its menu and operations in response to changing consumer dining habits, it has always remained focused on what it delivers best — a unique fondue dining experience, a variety of fresh menu selections and a guest-centric standard of service.”